I’m sure some of have seen some of Tyler Stout’s amazing illustration work around the web. Tyler creates many intricate illustrations for movie posters, band posters, and other prominent companies . Tyler has been kind enough to provide Vectips with an interview, so read on to learn about his Illustrator experience and industry insights.

Tyler Stout Around the Web

Hey Tyler, thanks for taking the time to provide Vectips with an Interview! To start, could you tell us about your illustrating background and what made you become a illustrator?

sure. i’ve been drawing all my life, and still have folders of drawings i did when i was 3 years old since my mom never threw anything away. so eventually when it became evident that i wasn’t going to excel at math or any sort of physical activity in high school, i began focusing on drawing and art and graphics and computers and stuff. from there i majored in something like ‘graphic media’ in community college. eventually i was doing more illustration jobs than design jobs, and they paid better as well and were less ambiguous (‘draw a tree’ is much clearer than ‘make my logo look good.’) so i decided to focus on illustration as a career. Are most of your posters commissioned? If so, how did you originally get these commissions?

yes, most of my stuff is commissioned. occasionally i do an art-print, but those are more just like fun imagery kinda stuff, not built around existing movies etc. anything that has type on it is commissioned, anything without type, that i’ve done a screen-printed poster of, is probably an art-print. 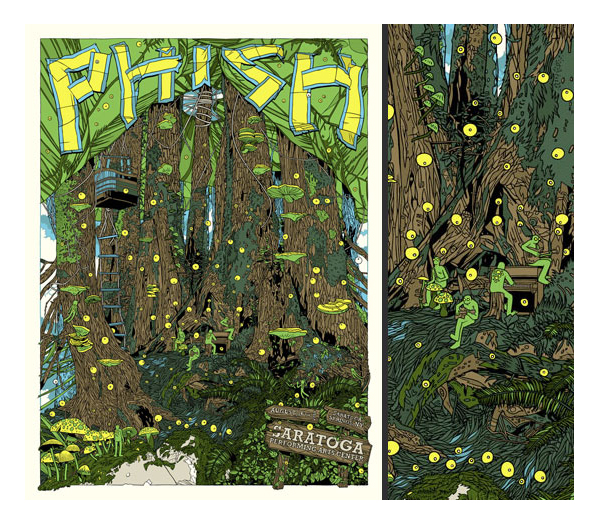 What is your favorite and least favorite thing about the illustrating industry?

hmm….well i suppose its the same thing, the work. sometimes i can really feel a project, and am happy with the process and how it turns out, and sometimes it can be a real nightmare, long hours, tons of revisions, project canceled in the middle (or the end) of the process. being a freelancer, i get to deal with a myriad of different people, and many of them are completely insane. but when i get to ‘draw something cool’, get paid for it, have time to really make something i’m happy with, then i like life.

As a professional Illustrator, what are your thoughts in general when it comes to stock and low cost illustration?

i dunno, i’m not bothered by it. i’m not competing with it i guess, the projects i do don’t really have ‘buy stock illustration’ as an option. when i think about what people use stock illustration for, its mostly stuff like magazine illustration, news illustrations….people don’t usually buy stock illustration for like a screen-printed poster, or a line of snowboards, etc. so at least right now theres still a demand for custom illustration, the world is big enough for both of us. people need such specific things, in specific styles, that it would be hard to meet all those needs with stock illustrations. plus companies like nike / burton etc, they don’t want to take the chance someone else is using that same graphic on a competing shirt, they want original art that they alone are using. 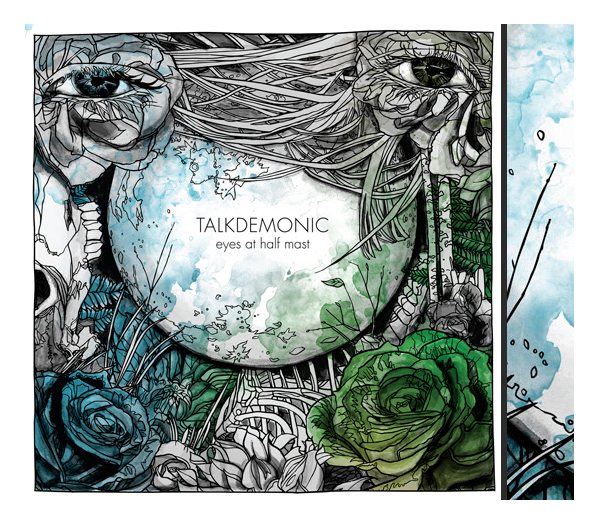 Could you describe your typical workflow for an illustration? How long does a piece take to complete, for example, your Inglourious Basterds poster?

probably a few weeks. i usually have a few projects going at the same time, i’ll work some on one, then some on another, just kinda jump around as i get inspired, as deadlines loom etc. i would say hard drawing time is probably 5 days, but the process of researching the project can take another 4 days, plus 2 or 3 days to color, do the type, tweak things. i can’t remember the last time i turned in a project on time, i usually work right up and over the deadline, just to get things right, and my clients usually are ok with that, since they want it to be right as well. 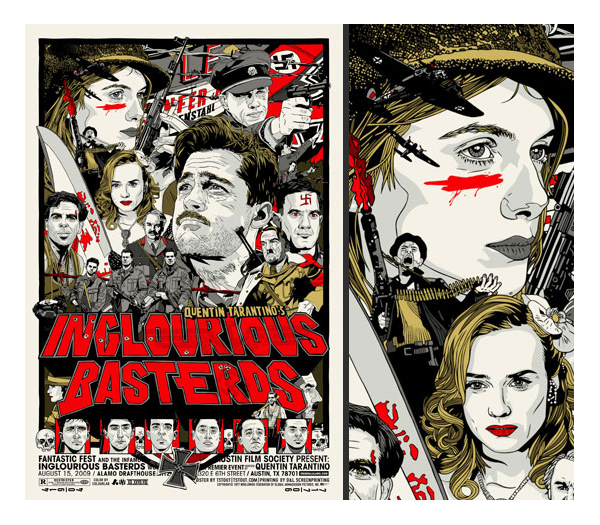 How is Illustrator and vector art incorporated into your pieces?

well, some posters and pieces are 100% vector art at the end of the project, some aren’t. if i were to look at my current work, the robocop poster i just did was never taken into illustrator, but the inglourious basterds piece was completely vector by the end. a lot of times i draw things by hand, then ink them in photoshop, then convert those into vectors via Streamline or Illustrator’s auto-trace tool. i don’t usually mix methods, with some pieces vector and some raster, its either all or nothing. for a lot of my illustration work, my clients like the ability to easily resize, so vector works the best, since it can be as small as a detail on a shirt label, or as big as a billboard. plus some of my more complicated pieces are sometimes made up of many smaller pieces, so feedback such as ‘make the type bigger, make that guy smaller, replace that guy with a different guy’, thats much easier in illustrator than if i drew it all in one piece, like that robocop poster. 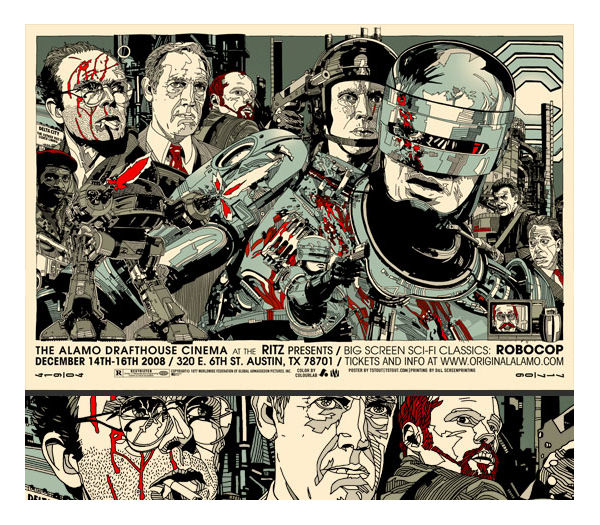 If you were magically be turned into any Illustrator tool, what tool would it be and why?

i would probably be one of those filters under the filters section. in other words, i’d be completely useless. ha ha. 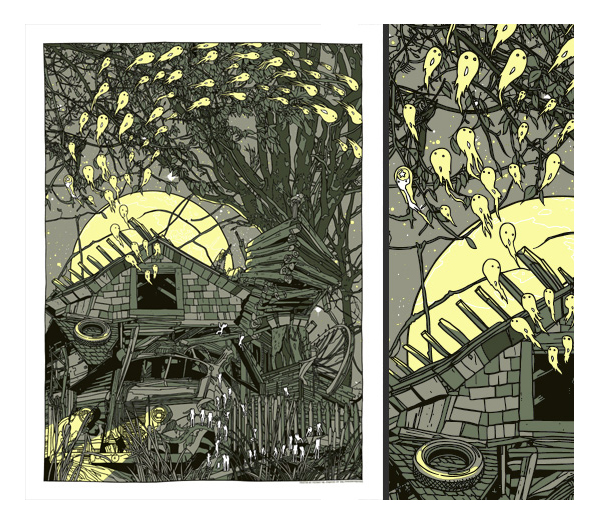 well, with the new illustrator (i went from illustrator 8 to CS3, so i kinda jump every few versions), i like the ability of double-clicking on an object and going into its specific group, makes it easy to select all of the same color and change it, or make small tweaks on it, without having to lock everything else on the artboard or work in as many layers etc.

i like adjusting the colors across the board, i believe under edit, adjust colors. that can come up with some color schemes that are a little more unique, since i usually work in just primary colors. 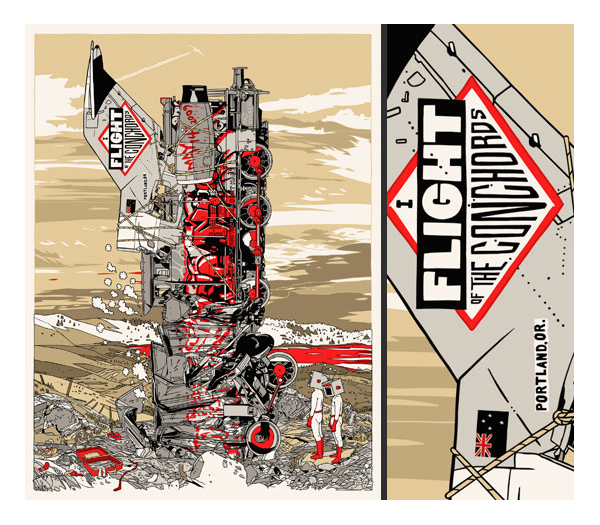 What aspects of your illustrations reflect parts of your personality?

hmmm…..i dunno. they are small in size and easy to email? ha ha. we are both pdf compatible? we enjoy having the option to outline our strokes? the comparisons are endless. 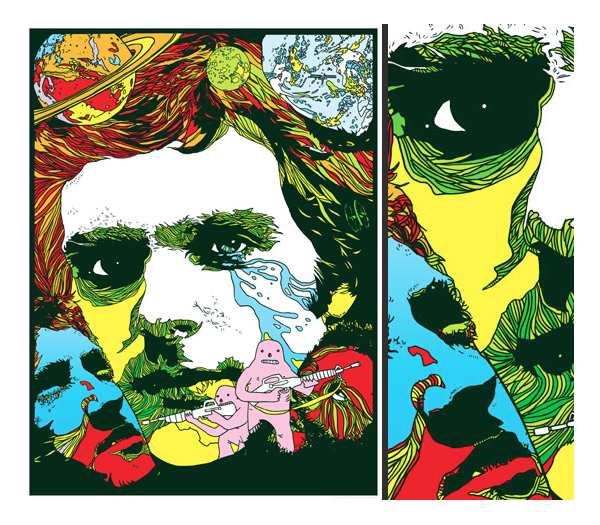 If you could pick any movie to create a poster for, what would it be?

a year ago i would have said the big lebowski, but i’ve done that one since. probably escape from new york is my current goal. big carpenter fan. then after than…i’m not sure. maybe something like ‘american movie’, since that’s a poster that now one is clamoring for, but would be fun to do.

What are your favorite sources of inspiration? 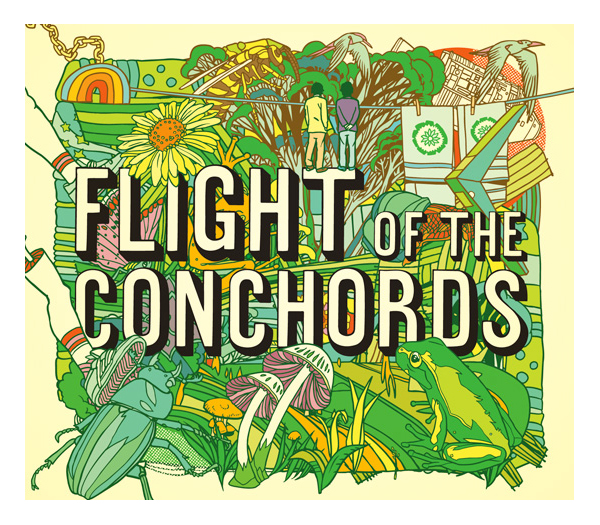 Thanks again for the interview! Is there advice any that you could give for aspiring and professional illustrators?

as long as you enjoy doing it and can’t imagine doing anything else, i think you’ll be ok. its one of those weird careers where you take something you love doing for fun and start trying to get paid to do it, and it can kinda be heartbreaking at times, and very stressful, but overall it forces you to continue to hone your craft and not give up on it. so, yeah. 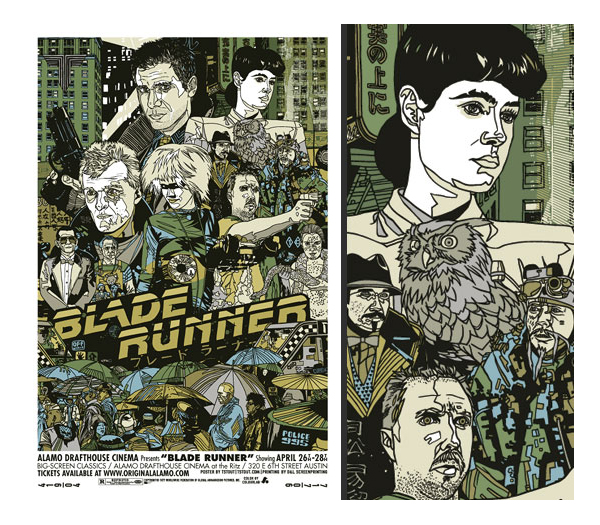 3 thoughts on “Interview With Tyler Stout AKA Tstout”