I have been working with the new Illustrator CS4 everyday for the past week. To test out the functionality and new features of CS4, I worked on logos, illustrations, web designs and more. There are some great improvements in the CS4 version of Illustrator. What are the new functions? How do they work? Is it worth it to upgrade? I’ll answer these questions in my review of Illustrator CS4!

In the review that follows I highlight some of the new and most prominent features of Illustrator CS4. It is broken down into Workspace Tools, New Drawing and Coloring Tools, Improved Core Functionality, and Enhanced Integration at Export (these are the new feature listed on Illustrator CS4 help site, accessed through the New Feature link on Illustrator CS4’s Welcome Screen). After the short description of the new features in each category, I give you my take on it. Further down the review you can also see my concerns, performance review and if you should upgrade.

Below is a breakdown of the system that I installed Illustrator CS4 on. Also, the type of work that I have been creating when reviewing it.

Replacing the Crop Area tool, multiple artboards can create documents that contain up to 100 artboards of varying sizes. The artboards can overlap, appear side-by-side, and even stack on top of one another. You can also print, save, and export these artboards independently or together.

The only problem I ran into with the multiple artboards (I just might be missing the solution), is that you can’t change the numbering on the artboards. If I wanted to make the first artboard the third one, I can’t. Granted, you can drag the artwork from one board to another, but it would be easier if I could just number them differently. 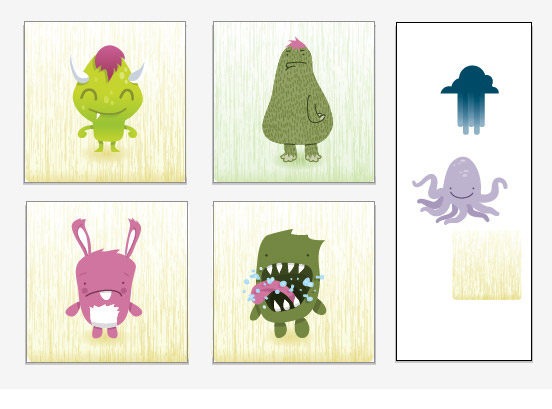 In the new CS4, you can display multiple documents in a tabbed view or orientate the documents side by side from the Arrange Documents window.

This new feature has drastically cleaned up my workspace. Before, I would have many floating windows all over my screen. Now I can navigate the tabs of my open documents or even display the open documents in a nice arrangement of my choosing. I have always liked using different workspaces for different projects. I have workspaces set up for illustration projects, logo projects, web design projects and so on. Placing the workspace switches on the Application Bar is a slight change, but it is a welcome one. It might just save you a few clicks, but over time that can amount to minutes or even hours. I can see how some people might not like the extra space it takes up , but you can easily remove bar if you want. 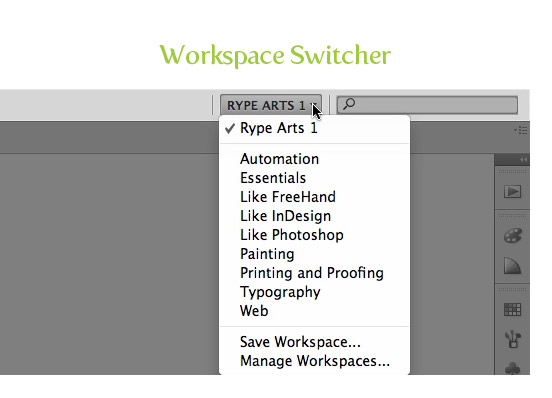 In the new CS4, the smart guides are more practical. The appearance and behaviors are more unobtrusive and pop-ups will appear with alignment and measurement information.

The updates to the Smart Guides are great. Before the CS4 version the smart guides could sometimes get confusing and diminish my focus, but the new guides help in this respect. 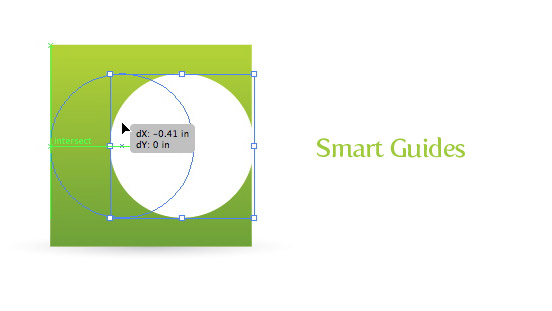 The new CS4 provides you with quick access to the key alignment option. A key object is the object you want the other object to align with. To specify and key object, select all objects and select the desired key object again.

Alignment is important for me when working in Illustrator. I’m glad Illustrator makes it easier to designate a key object to align the other object with. Ultimately, this has sped up aligning objects in Illustrator for me.

I was very excited when I learned about the Blob Brush after Adobe announced CS4. It has lived up to my expectations except in a couple regards.

First off, the ability to draw filled paths has sped up my work flow. Before I would create a Calligraphic Brush, draw the path, expand the appearance, and clean up the paths. With the Blob Brush, I only have to draw the path. Used in conjunction with a pen tablet, you can create some great fluid elements.

The only part of the Blob Brush the sometimes creates problems for me is the merging feature. With a Calligraphic brush, I can draw a bunch of overlapping paths and still be able to rotate, size and edit the path. With the Blob Brush, the paths are merged so I can’t change the size, orientation, and so on. I can still use the Calligraphic Brush in CS4, but it would nice to have the option of no merging with the Blob Brush. 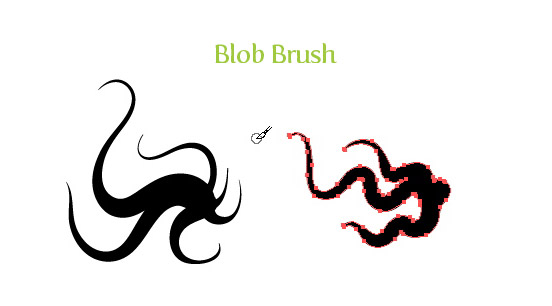 The new enhanced Gradient tool lets you interact with gradients on the object itself by adding or changing color stops, applying transparency to color stops, and changing the direction or angle of a linear or elliptical gradient. The Gradient panel has been updated as well. The Gradient panel now provides a menu of saved gradients, directly access color panels, and apply transparency to individual color spots, among other things.

The new Gradient tool and panel are amazing! These expanded features take a great deal of the guess work that came with creating and editing gradients in previous Illustrator versions. The ability to interact with the gradients directly on the object is more intuitive then playing around with the location and angle previously. Moreover, the Gradient Panel has the same great feature of editing that the tool does. 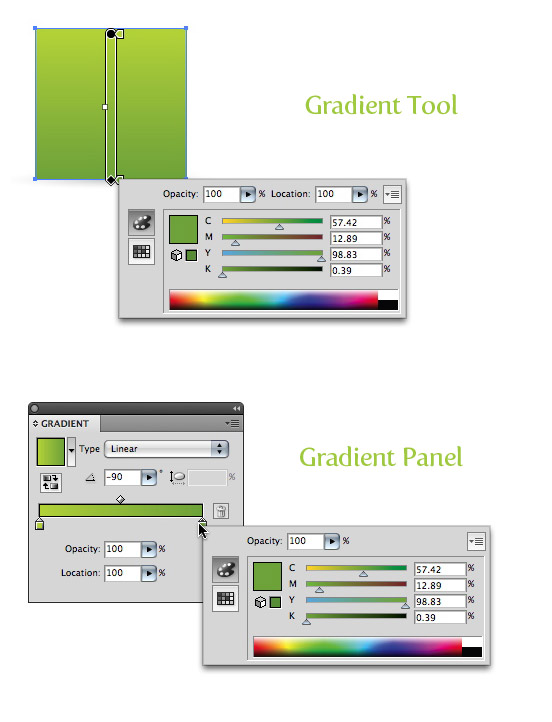 In the new CS4, you can define the opacity of individual colors in a gradient.

This is one of the most welcome improvements to Illustrator. Being able to create transparency in gradients makes it easier to create compelling drop shadows, vignettes, and more. Because of the updated Gradient panel and tool, editing the opacity of a certain color stop is easy. 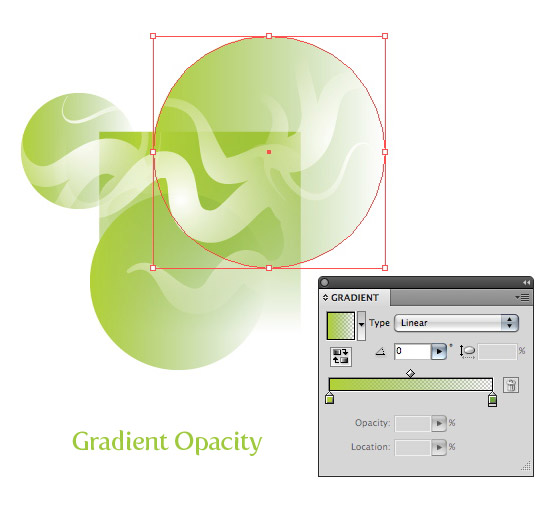 This is another new feature that has finally came to Illustrator. No complaints here, the feature does what it says and has already helped me with a couple of projects. Having this feature saves me the trouble of opening an Illustrator file in another program just to see the separations. 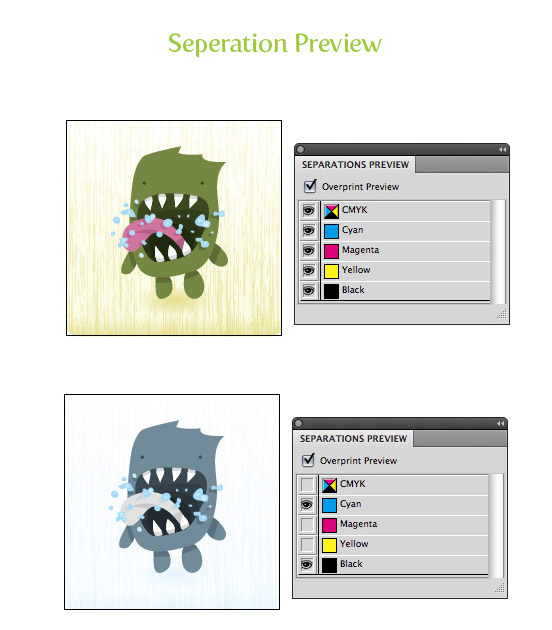 Clipping masks in CS4 now displays the masked area while you are moving and transforming a masked object. Double-click the masked object for isolation mode, where you can edit, and views the mask independently of all other object.

The updated clipping masks has already greatly improved my productivity and quieted frustration. If you have worked with multiple clipping mask objects and tried selecting object around them, you know what I mean. The isolation mode is a great feature as well. It makes editing the masked object much easier than before. 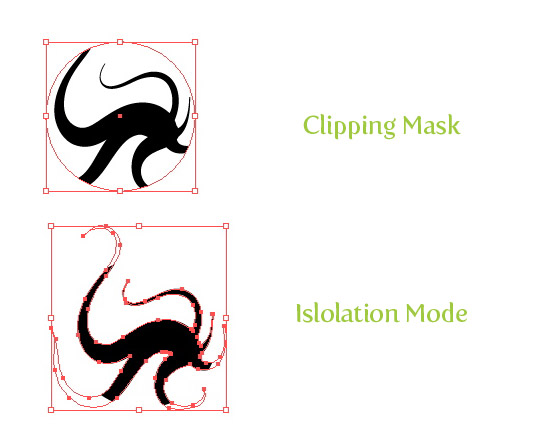 With the updated Appearance panel, you can view and use the enhanced full-featured controls including: effects, strokes, fills, and visibility.

I wasn’t excited about the updated Appearance Panel until I actually had time to play with. Now you can do a great deal of object editing in one panel. This helps the bouncing around from the stroke panel, to the color panel, to the swatch panel, and back and forth. The Appearance Panel is quickly becoming my favorite panel to work in. 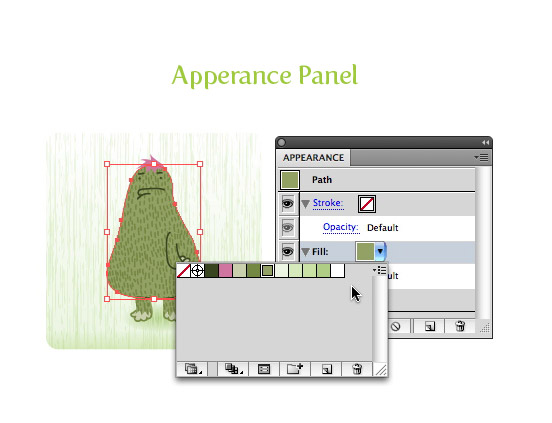 The updated Graphic Styles panel provides you with a quick and easy way to view and apply styles to objects. You now have options to view the thumbnail preview as it would appear on text or on a selected object. Effect-only styles now display the outlines of the object on which the style was created.

Sometimes I have a Graphic Style with many effect-only elements. I love the fact that I can actually see the outline of the original object that it was applied to now. The thumbnail previews are a nice extra bonus I found myself using when applying Graphic Styles to text. 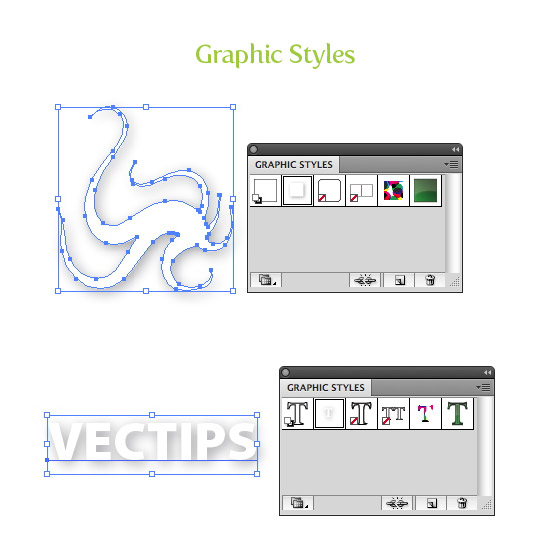 Multiple artboards now makes it easy to export multi-page documents. You can export artboards to any of the following formats: PDF, PSD, SWF, JPEG, PNG, TIFF or import a multiple artboard Illustrator file into Adobe InDesign or Adobe Flash.

The multiple export support is great. Testing the different formats I did not run into any problems. Exporting multiple artboards to a multiple page pdf has already saved me time and headaches. Moreover, when you save down to an earlier version of illustrator you can save each artboard as a separate file.

I did not do any benchmark testing with the new CS4 and older versions of Illustrator. However, I did not see any boost in speed when launching the application, opening documents, and overall performance. Likewise, didn’t see any downgrades in the performance. I am using a Mac so I would have loved to see the 64 bit integration that occurred in the Windows CS4 version. If any of you are working on Windows, have you seen a difference in the performance?

From using Illustrator over the past week I have only run into one little annoyance. I run into this problem when I use the Subtract and Intersect functions of the Pathfinder Panel. It used to be that I could create multiple objects, group them together, and Subtract or Intersect the group with another object. CS4 won’t let me do it. Illustrator will now subtract just the bottom most shape, not the grouped shape. Still, I have found a way around it. Instead of grouping the object together, I create a compound path out of the objects. Now when I Subtract or Intersect, it works fine. This is a little annoying because it adds an extra step. But, the new pathfinder panel takes out the step of having to expand the the shape after pressing one of the pathfinder functions. So I guess it equals out. 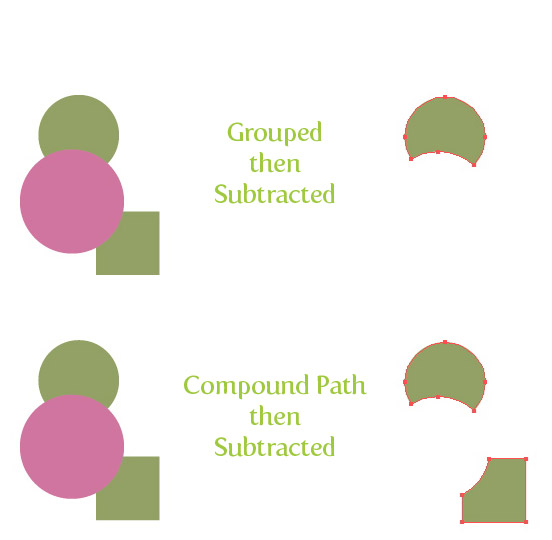 I’m happy with the upgrades and new features of CS4. In particular, the Gradient tool and panel upgrade, multiple artboards, and Appearance panel update have impressed me. These new functions have improved my productivity significantly, making it an essential upgrade for me.

illustrator CS4 has many compelling reason to upgrade. If you are a productivity freak like me, it will be worth it to upgrade. After only using CS4 for a week I have become more proficient in Illustrator. If you don’t care about speeding up your work flow, you might want to upgrade because of certain features. If you use gradients all the time in Illustrator, you should upgrade. If you work with projects that require a couple of documents, you should upgrade. CS4 has a little something for everyone, just check out the feature and see if it has something for you!

If you are a “light” user of Illustrator, you are not clamoring for one of the new features in CS4, you don’t care about proficiency, or you do not have the money, you will not fall behind the curve if you don’t upgrade. If you are still using Illustrator 10 and below, now is a great time to upgrade.

Are You Going to Upgrade?

I’m curious to see how many readers are going to upgrade. Are you?!