The first time I saw artwork by Aidan Hughes, I was in the local record store (Back when you still purchased CDs) and came across an album by KMFDM. I studied the artwork. I loved the dynamic black, white and red illustrations. It was one of my first inspirations into exploring illustration. Aidan, a experienced illustrator, provided an interview for Vectips with Illustrator, style and industry insights.

Aidan Hughes is a commercial artist, born in 1956 in Merseyside, England. In the 1980s, Hughes published a pulp-style magazine called BRUTE! which earned him notoriety as well as becoming an occasional pseudonym for Hughes. Aidan Hughes is well known for creating most of the album covers for the industrial band KMFDM. Two of KMFDM’s music videos (“A Drug Against War,” “Son of a Gun”) were animated versions of Hughes’s artwork. His other work has included outdoor murals, including the 75 meter mural in Barga Italy during 2003 which has since been covered over with an earth bank; and a wide variety of CD sleeves, computer games, clothing, furniture, storyboards, logos, tattoos and other multimedia.

Aidan Hughes Around the Web 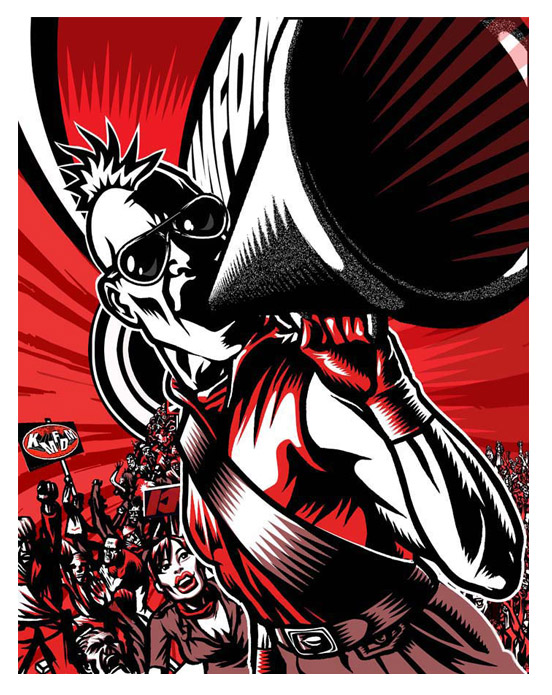 Hey Aidan, thanks for taking the time to provide Vectips with an Interview! To start, could you tell us about your design and illustrating background and what made you become a designer and illustrator?

I’ve no design or graphic training as such, not even art school. My father was a painter and I learned what I know of lighting and perspective from him. He also filled the house with books on architecture, transportation and the human figure which I pored over a a kid. He taught me a lot of tricks. When I first left school, I’d wanted to become a printer, lured by the smell of ink and the big press. But I went into the fashion business for a couple of years before starting to design and illustrate on my own. I started mostly with things like portraits and business cards and then went into self-publishing my own short stories and comics. Since then, I’ve designed CD sleeves, computer games, clothing, furniture and created storyboards, logos and tattoos as well as the art and video stuff.

How has working in the music industry influence you artwork.

No more than any other client who knows what they want. The only ways one client differs from another is the speed with which they pay and/ or get back to you. Where do you pull inspiration from and why?

Back in the day, it was from TV, magazines, drugs, socializing, listening to people talk, looking at cars and posters and digging other people’s work in the glossies. Now, of course, I get asked to design something specific and I’m on Google Images straight away. I used to have a library, loaded with dusty old art books and movie magazines, which I used for inspiration and research. No longer necessary. Working in advertising helps you think up things quickly and I normally will have three or four rough ideas sketched out for the client by then of the day or sooner, if need be. So I need to know quickly where to go to get the images needed for the job without having to flip through endless hard copy. When I was working for a company in Seattle, I once inked 250 pictures in a week and had to learn to draw using my other hand.

What is your favorite and least favorite thing about the design and illustrating industry?

(Least favorite) The money. It doesn’t seem to have gone up much in the last couple of years and I’m sometimes struggling to get some companies to commit to even those prices. In 1985, I was getting £4-5000 an illustration. Now, I’m getting paid the same to do two or three.

(Favorite) The money. And the chance to have your stuff published in some thick glossy book that smells of ink.

The client normally has a few ideas or specifications that they want included in the illustration so we email each other a few times before I work on a few roughs. These are a mixture of marker sketches and Photoshop filtered backgrounds that I put together and they either pick one or they want to mix elements of each. If the latter, I’ll swap layers, move things around and render a new version. If it’s OK, I consider that a ‘green light’. I then pencil and ink out the different layers, scan the black and white art into Photoshop (I normally only use things like Cut-out and Poster Edges) before vector tracing it in Illustrator. After making a rough trace, I’ll then tweak anchor points and work on it with Brushes to get the corners nice and tight. That’s about it. My stuff is pretty basic so I’ve been using the same techniques for years. 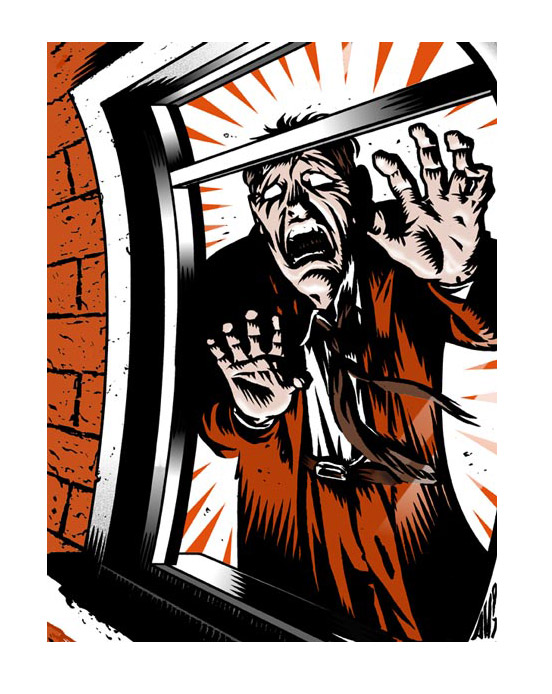 When did you transition into working with Illustrator for some of your pieces? Was it an easy transition?

I remember this guy from the art department watching me work. He asked me why I wasn’t working in Illustrator (this was back in 1995/6 and I hadn’t even got my head around Pshop yet). He explained to me the concept but I still really hadn’t opened it up until years later when I was working on a poster for an exhibition. It was amazing. No more messy pixels! Clean and pure, just like I’d always wanted to work. I even started to dream in vectors and I started to see anchor points on the corners of everything because I was working so much on it. I’d spend hours experimenting with fractal shapes for my cloud formations using the Transform All and Roughen tools. However, some clients complained that my work was getting too clean and minimal, saying my stuff had lost its edge and was looking more and more like logo design. So, I had to balance that with a more illustrative, hand-drawn look, which is what I do now.

What are some of the pros and cons of working in Illustrator for you?

I miss Metacreations Vector Distort. Why did Adobe they buy it and then delete it? Plus, I miss the Graphic Pen feature of Illustrator 8. Outside of that, I love Illustrator. To me, an Illustrator file is more important than a painting. I love its purity and starkness. Painting is messy and uncontrollable. I’m like a big kid with my pen and tablet, especially if its an image using text. I guess the magazine I did years ago, BRUTE!, would have looked a lot different if I’d had Illustrator back then.

That’s a hard one but I’d have to go for Scatter Brush, because I use it for spikes and architectural detailing. When I think of the years I spent drawing every window in a street scene… 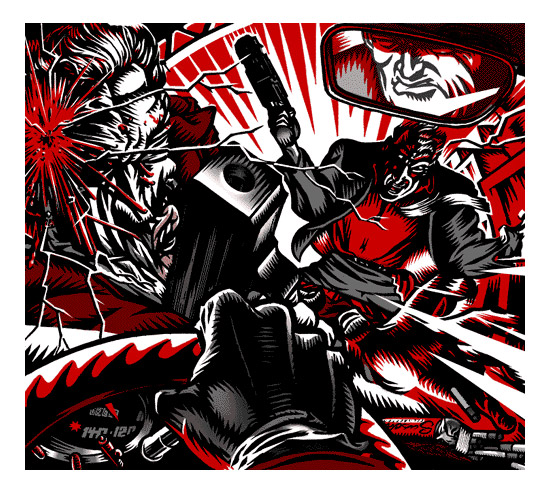 What aspects, if any, of your designs and illustrations reflects parts of your personality?

One of the best and worst aspects of my job is that I rarely get asked to do things outside my stylistic range and that freedom enables me to explore the different sides of my personality, such as pictures of the countryside or of animals. The shapes of cars, buildings, weapons and women appeal to me more than hills and valleys (although, intrinsically, they are the same curves). There’s a lot of sexual tension in my work, I’ve been told, but I’m more interested in shapes and how to compose them: the curve of a car bumper or a woman’s hip, the glossy cylindricality of a gun barrel or megaphone, the flare of images in perspective. Cities appeal to me in many ways and the dynamic lines are important to the speed of the image. I have done some work outside of these themes but I rarely stray from what I do best.

What are you favorite sources of inspiration?

Retro-futurist designers like Norman Bel Geddes and Alberto Saint E’lia, Russian Constructivist graphics, Communist propaganda posters of the 20’s, pulp paperback covers from the 1940’s-50’s, movie posters, 1960’s Space Race art from the USSR, the woodcuts of Lynd Ward and Frans Masereel, artists Steve Ditko and Jack Kirby of Marvel Comics fame, Kasimir Malevich, Alexandr Rodchenko, El Lissitsky etc. I also like the pin-ups girls of Elvgren and the paintings of John Martin. However, I would say that I derive 90% of my inspiration from the movies and having the ability to freeze frame certain scenes from a film is very useful indeed in creating my work..

Thanks again for the interview! Is there advice any that you could give for aspiring and professional illustrators and designer?

Get yourself an agent. 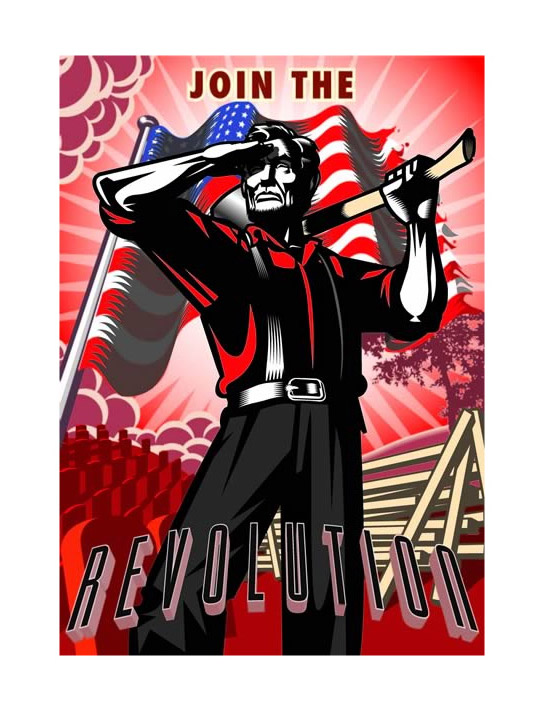