I have a couple of t-shirts designed by Glenn Jones, as I’m sure many of you do. Even if you don’t, you probably recognize one of his many t-shirt designs sold on Threadless and his Glennz shop. Utilizing pop-culture references, Glenn’s vector illustrations are fun, engaging, and compelling. Read on to learn more about Glenn’s Illustrator experience and industry insights.

A freelance graphic designer and illustrator based in Auckland, New Zealand. Glennz has worked in the design industry for over 15 years concentrating on packaging and corporate identity. Glennz recently decided to focus on illustration and T-shirts. 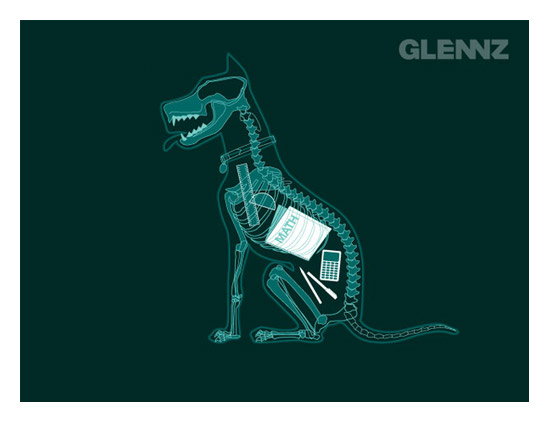 Hey Glenn, thanks for taking the time to provide Vectips with an Interview! To start, could you tell us about your design and illustrating background and what made you become a designer and illustrator?

I was always interested in drawing from early on so in my later years at school had decided that I wanted to get into graphic design and illustration and took a lot of related subjects. My first job was at a newspaper where they were just switching onto macs from old school paste-up and hand drawn illustration. The first version of Illustrator was sitting there unwrapped because no one had wanted to use it, so my boss said I was free to give it a go and I just taught my self in my spare time. It was a very different program than today, back then you could only draw in wireframe mode, then had to switch over to preview to view it. the rendering took a while – and my mac II which was brand new at the time had 2 mb of ram so it was slow going.

What is your favorite and least favorite thing about the design, illustrating, and clothing industry?

I guess my favourite thing is seeing my ideas come to life, it’s pretty cool when you see someone wearing your tee. I used to do a lot of packaging design so it was always pretty satisfying seeing it on a shelf somewhere. Least favourite thing would probably be unrealistic deadlines, I don’t have to worry too much about that these days but I used to work up against some tight deadlines that were often unrequired. I think a bit of pressure can bring the best out in people, but if its too restrictive it can effect the final result which isn’t good for anyone. 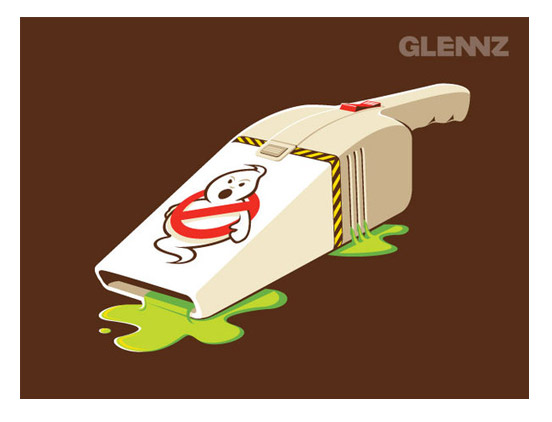 Usually before I start, I try to work out in my head how I want it to look and basically what I want the concept to be. Then in a new document I lay down a background colour on a bottom layer and lock it. On a new layer above I draw out my picture roughly using a stroke colour that contrasts with my background colour just so I can see it easily. Once I’m happy with the layout I turn that illustration to guides and use that as the base to draw my final illustration. What is your favorite illustration? Your least favorite?

Not sure, don’t really have favourites. 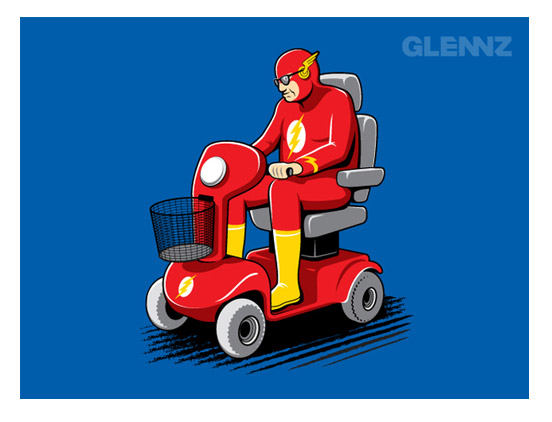 You have created many illustrations for Threadless and now your Glennz Tee shop, where do all the ideas com from? What is your favorite source of inspiration?

Its usually when I’m not trying to think of an idea when I get the best ones. I can get inspiration from anywhere, I like to take pop culture and put an original spin on it. 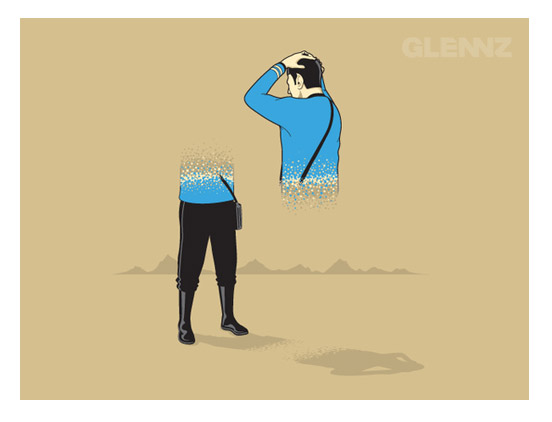 Why did you choose Illustrator and vector art as a medium?

I think from early on I enjoyed the crispness of the result of vector art and the ability to go back and change lines and colour. 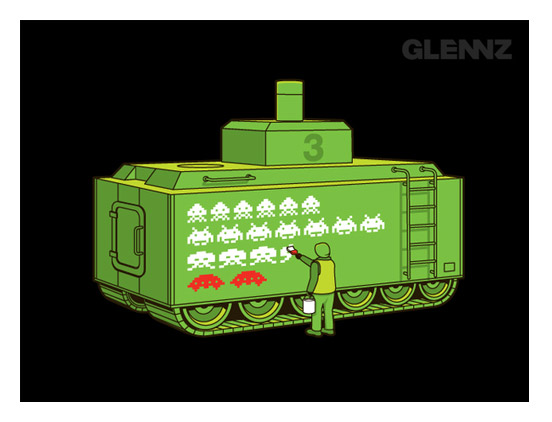 Pen tool – Its pretty much the only tool I use. Bézier curves give to the ability to refine easily. 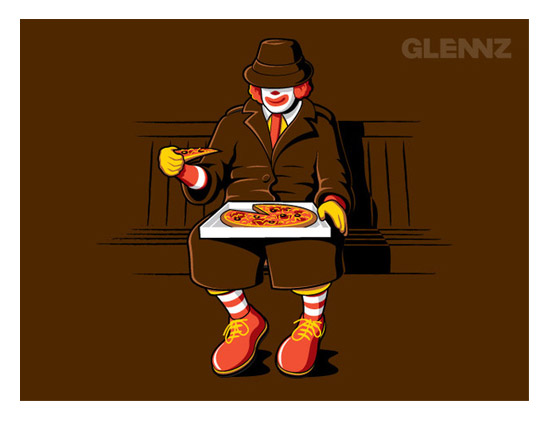 Probably using the free transform tool to quickly add perspective. Not sure if its widely known or not, but most people who see me do it aren’t aware that if you hold the command key down just after click and dragging a corner anchor point, it allows you to easily add perspective on the go – I use that a lot. 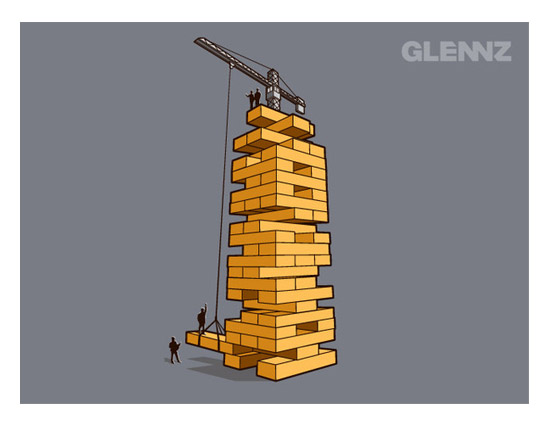 Have you upgraded to Illustrator CS4? If you have upgraded, what is your favorite feature? If not, why haven’t you upgraded?

No I haven’t yet, I’ll probably upgrade when I upgrade my MacBook Pro. I think its always good to wait for a while just until they get any bugs ironed out. 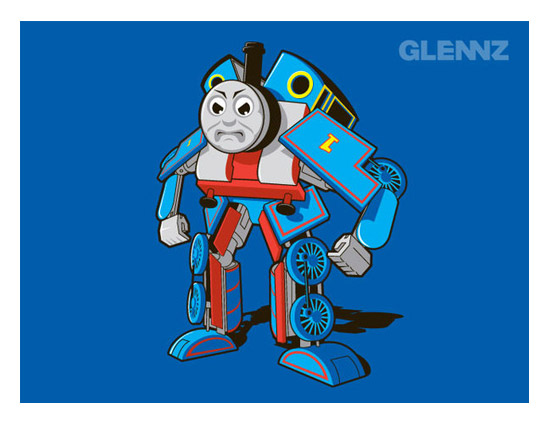 What aspects of your designs and illustrations reflect parts of your personality?

I guess I just try to use my imagination – put a bit of a twist on things. 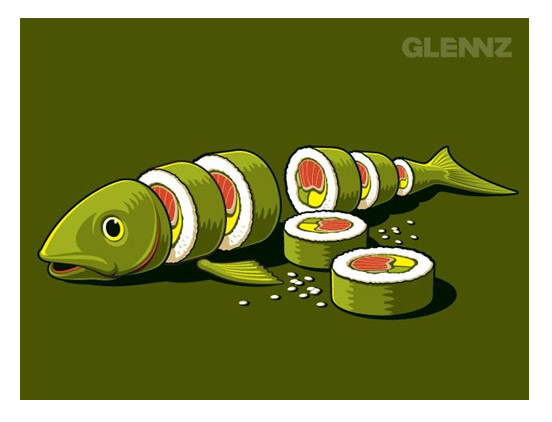 You used to do t-shirt design as a hobby, has designing t-shirt become less of a hobby now you are doing it full-time with GLENNZ tees? If so, what are you going to do as a hobby now?

I sort of still treat it as a hobby, I think if it became to regimented like work, Id just start pumping out illustrations and not enjoying it as much.

Do you have any crazy fans or stalkers online or offline?

Ha, I do have a few people that follow my work closely and I get a lot emails asking questions, but its all been pretty good so far. 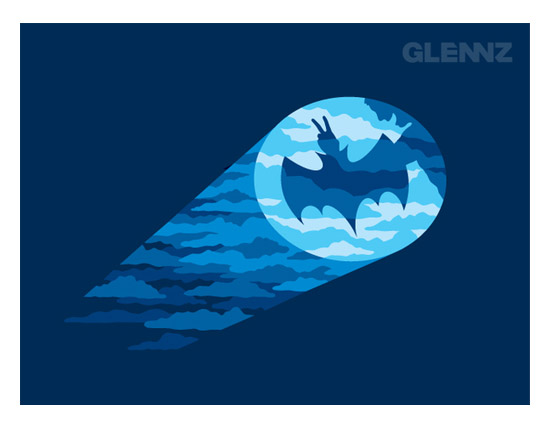 Do you have any new project in the works?

I always have a few illustrations underway, I usually draw them and leave them for awhile – then go back to them later with fresh eyes.

Thanks again for the interview! Is there any advice that you could give for aspiring and professional illustrators and designers?

I think practice makes perfect on Illustrator, the more you use it the better you get and find ways to use a lot of the features to create short-cuts which makes it easier to get a better result.

9 thoughts on “Interview with Glenn Jones aka Glennz”